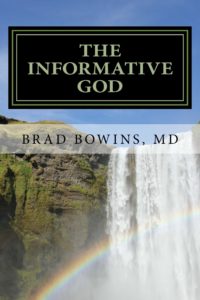 Imagine a book that provides the answer to what happens after our time on this world is over, reveals a “treasure” worth more than all others combined, and merges religion and science. The Informative God is that book! Following a life changing event, a young internal medicine specialist embarks on a round the world odyssey to uncover the meaning of life and death. This adventurous journey of discovery highlights the contribution of past and present religions. Making the most of this information and the input of science, he achieves the answer that also identifies a “treasure” of infinite value. Consistent with the uniqueness of these discoveries, the book represents a first for combining fiction, non-fiction, and travelogue. For a refreshing and optimistic answer to the ultimate question, take a journey of discovery to The Informative God.

The Informative God You Tube

I very much enjoyed reading this very entertaining yet no less erudite exploration of both major and minor religions across the world and throughout history. The author achieves this through very effective storytelling, all the while, leveraging a thoughtful balance of dialog, observation and reflection as he travels the globe in search of answers relevant to salient questions about God, religion and spirituality. As a finale, a very approachable physics-based discussion crowns the work suggesting a fresh, some might argue ingenious, way of thinking about religion and spirituality. Through its aptly named title, The Informative God, Bowins gracefully leads readers toward his initial revelation that what is persistent throughout and after life is information and that a non-mathematical pondering of quantum mechanical concepts might well establish a viable basis upon which to address many of the mysteries shadowing these very kinds of questions. The book does a wonderful job integrating areas of interest, often complex, and in the end posits a direction for resolving aspects of the staunch chasms separating religion, society and modern scientific thinking, perhaps finally a workable reconciliation between religious and scientific thought. The author follows an approach and style that cleverly manages to free the shackles of constraint imposed by otherwise conventional, dry academic prose whenever it seeks to encapsulate multiple seemingly disparate disciplines. The science based assertions quickly inspire a lively subsequent pause for thought and perhaps for those with greater interest a deeper philosophical study.

I enjoyed the book; it was an easy read. It provided great armchair travelling around the globe with interesting tour guides, and new insights into various religions. It also has a terribly dramatic opening story that left me stunned; romance; and both thoughtful and humorous and dialogue throughout. Oh yeah and the science was intriguing. Both entertaining and intellectually stimulating.

I found this book to be interesting and informative when discussing the various religions of the world. Written in story form I became interested in the characters and what was going on in their lives and the discoveries they made. In the later chapters I found that someone interested in science and physics would really enjoy the conversations and ideas presented, although for me it was not as interesting as the previous chapters since I am not very scientific minded. Overall, I found the book informative and interesting in learning about the religions of the world and glad that I read it.

For a more detailed look see Amazon Inside Cover via links below.